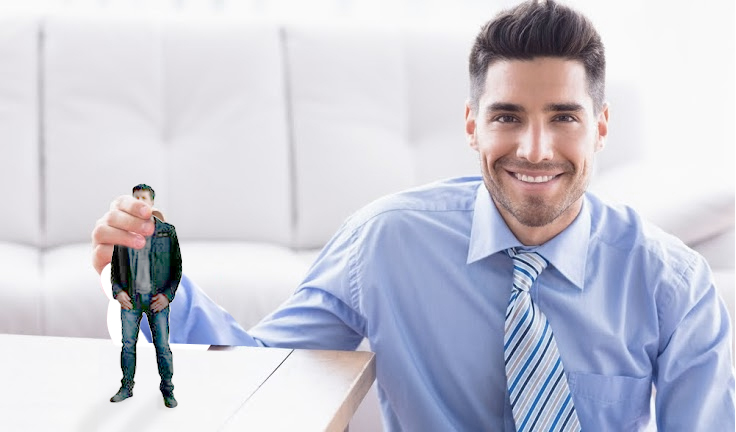 LONDON ─ After pondering what special gift to give his girlfriend for Valentine for several weeks to no avail, City Banker  Donald Smith stumbled upon his Eureka moment when, at rush hour commute, he read in the Metro a report on Asda Supermarket’s 3D printing service of humans, according to report.

Sources said the 28-year-old upwardly mobile banker was beside himself with excitement when he read that he could pop into his local Asda and have a miniature version of himself printed in 3D to be presented to his girlfriend as, perhaps, the most romantic gift of all time.

“He was grinning from ear to ear when he opened the Metro and saw the report on the progress of 3D printing,” said John Hayes, a fellow commuter. “I mean he was so excited that he screamed out loud “Eureka”’.

As Valentine’s Day was just round the corner, sources said Smith wasted no time in getting his 3D image printed in Asda.

“I’m chuffed to bits with mini-me,” Smith purred to reporters, when presented with the 3D miniature of himself. And I bet my girlfriend Anna would absolutely dote on it.”

“I mean my 3D mini-me just solves all the problems Anna and I have been having lately,” continued Smith. “She’s been complaining that I haven’t been paying enough attention to her.”

“Just the other day she was saying how we no longer do things as a couple. She’s like I’d rather be on my X-box than sit through a box-set of Girls with her.”

“She kept saying how I’m not a good listener. She’s like anytime she’s telling me about her day at the office she knows exactly when I tune out of her monologue. That she’d just love it if I could listen to her as she drones on and on and on.”

“Hey presto! Mini-me to the rescue. Problem solved. Mini-me is so convenient she can take it anywhere she wants: the office, movies, clubbing, just name it. She’ll get all the attention she craves. And for the listening part: Mini-me would never get tinnitus from listening to the sound of her voice. Happy days!”

Sources said when Smith presented his 3D mini-me to his girlfriend on Valentine’s Day, extolling all its virtues as he did so, his girlfriend leapt to her feet and grabbing the ceramic figurine in a firm grip by its feet, smashed it by the head against the sharp edge of the candle-lit dinner table, promptly decapitating the mini-me, before stomping out of the apartment.

At post time, Smith is reported to be seeing a therapist as he reels from the shock and horror of seeing his mini-me beheaded.