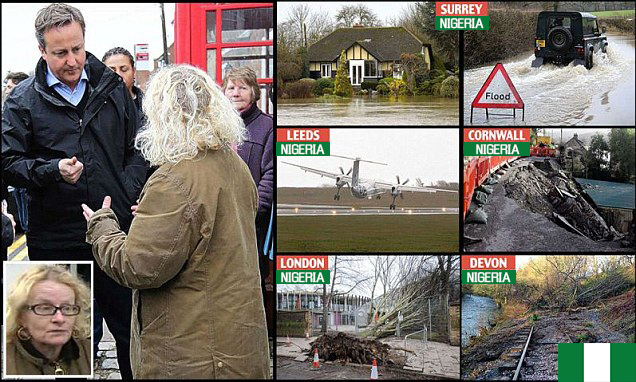 After visiting parts of Britain that have been without power for about a week and finding the people of those areas in high spirit and good cheer, the British Prime Minister, David Cameron─while likening the great show of camaraderie he saw on display to the survival spirit of the Nigerian people in adversity─declared those places as parts of the territory of the Federal Republic Of Nigeria, according to reports.

Sources said Cameron had visited the affected areas like Surrey and Kent to empathise with the people after the big flood had brought down power lines. The Prime Minister had, however, been surprised yet impressed with the manner in which the communities have knuckled down and got on with things. Cameron expressed his admiration at how these British people have coped with darkness even though most of them had never known life without power for generations, just as the people of Nigeria have always coped with darkness, even though they have never known any form of stable power supply since the discovery of electricity.

“I must say that I’m really impressed with the people of Surrey and Kent for coping so well without electricity for like a week,” said Cameron to reporters. “In true Brit style, no moaning, just knuckle down and get on with it. The ‘whatever-life-throws-at-you’ spirit. Not unlike the people of Nigeria who have no idea what it means to have uninterrupted power supply even for one day. You know what guys? By the powers vested in me by parliament I think I’m just going to declare these places territories of Nigeria. Yeah. Surrey and Kent, they are no longer parts of the UK from this minute. They are to be called Nigeria.”

While the Nigerian High Commission in London is being relocated to the power-deprived area of Kent, the UK Border Service, working with the Nigerian authorities, is said to have started creating perimeters along the affected areas and only persons with appropriate visas may visit between the two territories.

At post time visa applications at the British High Commission in Nigeria is said to have spiked exponentially from Nigerians wishing to visit relatives living in the new territories of Nigeria based in Surrey and Kent.