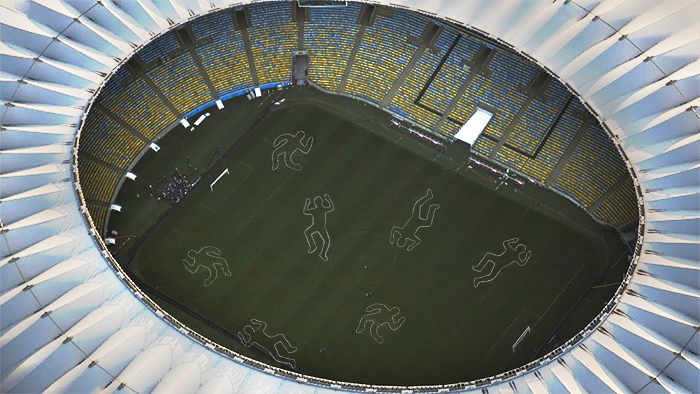 RIO DE JANEIRO, BRAZIL—As the FIFA 2014 World Cup juggernaut ground to a halt with Germany pipping Argentina to the trophy, FIFA reportedly paid tribute to all the construction workers who sacrificed their lives so that the world may enjoy the greatest show on earth, by having their chalk outlines painted permanently unto the Maracana pitch.

Sources said immediately after the trophy was presented to the victorious German team, the tearful Argentine team was unceremoniously ushered off the pitch—to prevent them from soaking the green verge with their bucket-load of tears—while painters quickly set to work, painting several body outlines unto the pitch.

“This is a day of double celebration,” said FIFA president Sepp Blatter. “We are not only celebrating with the people of Germany for winning the 2014 World Cup, we’re also celebrating the selfless sacrifice of all the construction workers who gave their lives so that the world can enjoy four weeks of the finest football rivalries.”

“Their body outlines will be painted in exactly the same shape their corpses were found when they suddenly dropped dead from exhaustion or lost their footing on a stadium roof and plunged about 50 meters unto some muddy pitch, cracking their skulls into tiny fragments.”

At post time, reverent football fans and officials inside the Maracana were taking turns to crouch near the chalk outlines to take solemn selfies to be posted on their Instagram and twitter pages.