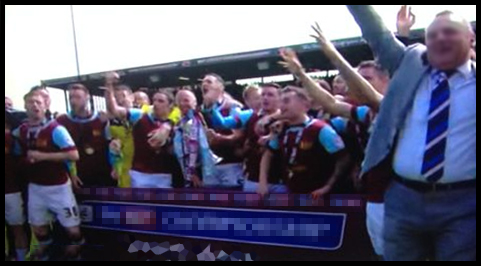 CLUELESS FOOTBALL CLUB, ENGLAND – A football club Chairman has reportedly been accused of a lack of class and decency after shamelessly celebrating the manager’s success in marshalling the clueless club’s promotion to the Top-Tier League of English football, yet knowing full well that he will sack the hapless manager just months into the new season.

Football sources say that against all rational advice, Clueless FC, also known by the nickname Scarlets, had achieved the unenviable feat of getting promoted to the top level English league.

This promotion, sources say, made the middle-aged Chairman lose all sense of decorum by dancing and singing on the football pitch – tie and suit flailing about in the wind – like a demented child in a toy shop.

“On behalf of the Board of Directors,” read a statement released by the duplicitous Chairman, “I would like to express my special thanks to the team Manager, who has performed beyond expectations to take us into the Top-Tier English League.”

Club sources say the Chairman’s drippy praise of the Manager should be taken with a pinch of salt. “I don’t know what the Chairman’s up to,” said Tony Collins, a club insider, “because he has already written the Manager’s termination letter, chock-full of platitudinous drivel. He has locked the letter in the club vault only to be released to the public within a few months into the new season when he does the ignoble thing of firing the manager.”

“Look, I’m all for success and all,” said Marvin Jones, a football analyst. “But I also believe that success should be tempered with realism. I mean do these people realise that the Top-Tier League is a cauldron of molten magma? Are they really ready for the madness up there?”

“Anyway, that said,” continued Jones, “I think that if you’re going to fire the Manager, why not be upfront with him now? Why make him wait couple of months into the new season, why make him taste the unbridled adrenaline high of the Top-Tier League only to pull the rug from under him. That is just cruel, man.”

At post time, the unscrupulous Chairman is said to have been observed casting a wide net in search of another clueless Manager who will replace the impotent incumbent Manager in a couple of months’ time.