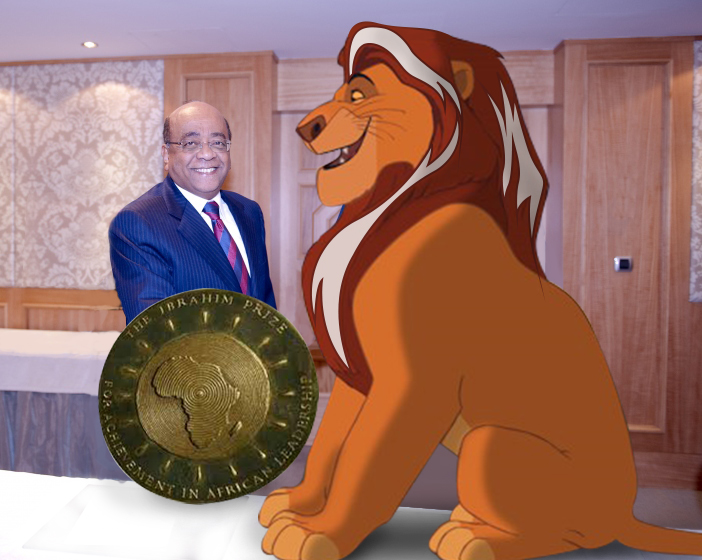 KHARTOUM─The annual £3.2 million Mo Ibrahim award for ‘excellence in African leadership’ has finally found a worthy winner in the form of King Simba, the celebrated Disney’s Lion King, according to African media reports.

Sources say the award, which is given to a leader who has governed according to the rule of law, raised living standard and served a term before voluntarily leaving office, had failed to find a winner for the past three years.

However, some African pressure groups, according to reports, have accused the Mo Ibrahim Foundation, of giving Africa a bad name, for failing to find a winner for the third year running.

“While Mr Ibrahim had first stuck to his guns about not demeaning the credibility of the award,” said Sharif Abdul, editor of Khartoum Chronicle, “it seems that he’s finally bowed to pressure to find a winner. And really who can argue with the choice of the Lion King?”

At the awards ceremony, the now enfeebled King Simba, his once proud mane suffused with grey, reportedly looked pleased as Punch. The philanthropist billionaire patron of the award, Mo Ibrahim, also looked pleased and relieved to have finally found a winner, after a two-year barren spell, say sources.

“The great people of Africa have spoken and we listened,” said Ibrahim, addressing the invited dignitaries, amongst who were pertinacious African presidents such as Robert Mugabe of Zimbabwe, Paul Biya of Cameroon and Yoweri Museveni of Uganda.

“I’d like to congratulate King Simba on this great achievement,” continued Ibrahim, smiling at the Lion King. “The error that the independent Prize Committee made was initially making the prize open to only democratically elected leaders. They had overlooked the fact that not all kings die on the throne.”

“Now that Simba’s son, err, what’s his name now? Oh! You can’t remember your son’s name too, ah, well that’s old age, my friend Simba, it happens to the best of us. Well, anyway, now that…Kopa, yes, that’s it. Now that Kopa has come of age to mount his mother and sisters, we admire your decision to slink off into obscurity without as much as a roar of disapproval. I hope that with the monetary prize you can find a luxurious retirement home to spend the rest of your life in dignity.”

At post time, reports have it that the Lion King got so drunk at the award dinner that his prize money cheque for £3.2 million went missing. There were murmurings amongst guests that President Mugabe was the culprit, said sources, but no one dared accuse the great Zimbabwean leader to his face.