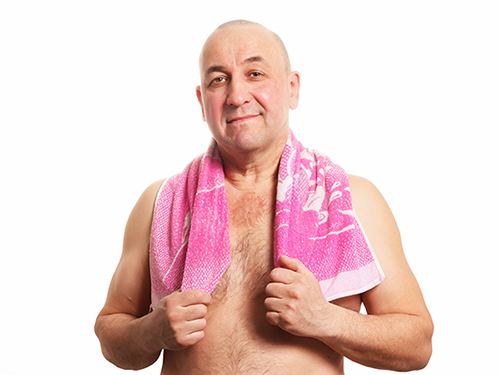 LONDON ─ Heeding the sage advice of First Utility energy company to share a bath with other people in order to save on electricity and gas costs, middle-aged Camberwell man, Tony Windsor─wearing only a speedo and a mini towel draped round his neck─sauntered across the communal yard to the front door of his hot female neighbour, Daphne Giles, with the intention of asking to join her for her morning bath or shower, according to reports.

“I think this is the best advice anyone’s ever given since the history of advice,” Windsor told reporters. “I mean everyone’s suffering from crippling bills right now so I just thought ‘Great! Just pop over to flat 5 and shower with the 25-year-old sexiest woman on Camberwell Grove Street.’ It’s a win-win situation for us both. Shower mates. What could be better than that?”

Sources said unbeknown to the portly and heavily hairy-backed Windsor, the delectable Giles had stayed the night at her boyfriend’s place leaving at home her 68-year-old widowed mother who had recently come to spend the holiday with her daughter.

“When Windsor knocked on the door, Mrs Giles opened it,” said neighbour, Sammy Wallace. “He was shocked and embarrassed and tried to make a run for it but Mrs Giles smiled coyly at him while she adroitly tugged at his speedo and pulled him inside the apartment.”

At post time Windsor could be seen naked at the window of the apartment making pleading hand gestures to passers-by to please please save him.