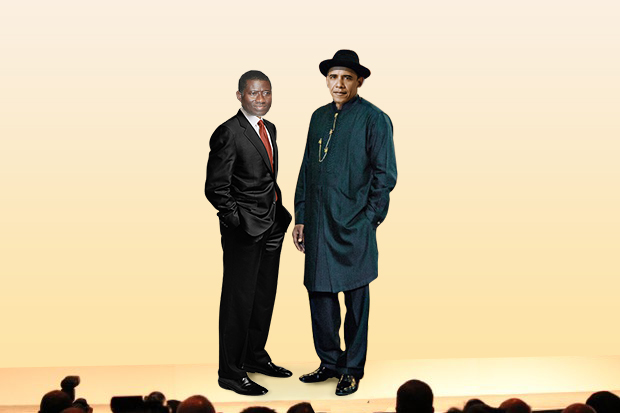 WASHINGTON─The White House has made public to the media the full transcript of a conversation between President Barack Obama and President Goodluck Jonathan of Nigeria.

President Jonathan paid a visit to the White House to hold bilateral discussion with Obama. The full transcript of their conversation is published below.

Obama: Hey Lucky! You don’t mind me calling you Lucky, do you? Great! I’m feeling lucky already. So you need a favour from me, right? Fire away my African brotha, anything for you. Do you need help with those terrorists at home? Or is it your abysmal power supply? Do you want help with your bad roads or is it the horrible air safety concerns? Or probably you want me to help with closing the digital gap with Western countries? Perhaps I can help with your death-camp hospitals, training, medical facilities, drugs and all that? Anything for you Lucky. Seriously, anything.

Jonathan: Ahem! Barack, my brother. The favour I want is really simple. Not any of those things that you mention. My people can endure all those hardships. That’s what makes us Nigerians. We love suffering. If things begin to work in Nigeria, it’ll be too strange and I fear my people will not be able to cope. The state of normalcy in Nigeria is when things don’t work. So don’t worry about all those things you mention, we are very fine with the present state of things in Nigeria, thank you. It’s perpetual snafu for us. We thrive on chaos. Now my request from you is of a personal nature.

Jonathan: Yes. Personal. It’s about me.

Obama: Why? What’s the problem? I mean I can see you’re looking good. You’re fat in the face as most African Presidents seem to be. Your skin’s glowing and your robust cheeks are all signs of good living, a stark contrast to all those hungry, suffering people we see in Africa. I mean with One Billion Naira budget for presidential food and entertainment, I won’t expect anything less. So yes what could possibly be the problem?

Jonathan: That’s exactly my point, Barack. You just hit the nail on the head.

Obama: I hit the nail on your head? Ah ha! C’mon Lucky, don’t frown like that. It’s just a joke, my brotha.

Jonathan: Well I don’t know for the American sense of humour. If you let my wife Patience hear you cracking such silly jokes, you won’t be laughing at all. She’s quite a tiger, that woman.

Jonathan: Back to my point Barack. You see in spite of all those perks that come with the office of the president, I still lack that presidential look. I want you to teach me how to look presidential. My advisers, Doyin and Reuben, they tell me that the Nigerian people mock me because I lack presidential panache. They say that I don’t have presence.

Jonathan: Yes, Barack. Even you, you’re surprised. My advisers say that’s why Nigerians make fun of me so much. There’s this word they use, that Reuben, full of big grammar, stupid Phd thing, as if I don’t have a Phd myself. Err…what’s this word again he keeps saying…err…it starts with a ‘g’…err…gra…gravity?

Jonathan: Yes…yes…that’s it…gravitas. No wonder they call you Professor. Do you know I used to be a lecturer? I have a Phd in Zoology.

Jonathan: Yes.  You’d think with my Phd in Zoology I’d be able to tame that tiger of a wife. But you can’t blame me, I dealt with fishes. I was a fisher man. And maybe I’ve lost my skills because that was a long time ago. Now all the lecturers in Nigeria hate me. That’s why they want to bring me down, striking for more money all the time. Anyway I have no time for them.

Obama: So your advisers say you lack presidential gravitas, right?

Jonathan: Exactly. You see people don’t notice me. I’m 6 feet tall and I could just vanish in a room full of short people. You could come into a small room and I’m the only person in the room and you will not even notice me. I just sort of blend into the walls. And my wife, Patience, she won’t be in the room but people will notice her. I don’t know how she does it. Everywhere we go, nobody will even see me, but her, never mind that she’s very short, everyone will see her and be bowing to her. It’s like I’m not even there. Like she’s the president and I’m the vice-president.

Jonathan: You see Barack, even you…you can see that it’s not good. We are working hard for the 2015 election and my advisers say if I don’t find a way to start exuding presidential charisma, I probably won’t win the election. They say that I need to put some swagger in my stride. They say that I need to enter a room with poise and style. That I must be eloquent when I speak to a gathering. And I must own the place. They say that as the president anywhere I go I must own the place. That’s what they keep saying, those boys. They’re driving me crazy. ‘Own the place, Mr President. You must own the place.’ What the hell does that mean, Barack? This is all alien to me. You really need to help me out, Barack. Shower me in some stardust.

Obama: What’s all the fuss about, Lucky?

Obama: But it’s all really quite simple.

Jonathan: Oh My God! See my life in Washington O! Thank you so much, Barack. You’re a genius.

Obama: Not so fast, Lucky.  This is America, we don’t exactly do anything for free, you know. I’ve got a secret request of my own that I think you can help me with.

Jonathan: Anything, Barack. Do you need money? We’ve got money in Nigeria, you know; just don’t tell my people, ok? Do you know the residence of the Vice President of Nigeria costs a mere 16Billion Naira? Err…in dollars that should be something like 100 Million Dollars. And your friend Jay Z, do you know that in 2006 when I was still a governor in Bayelsa State, I contributed One Million Dollars to a concert he was performing at in Lagos, money I took from poverty alleviation fund for my people in Bayelsa. I don’t know exactly how much Nduka paid Jay Z and Beyonce but I won’t be surprised if they got the full wedge. I answer to no one, Barack. Just tell me how much you need.

Obama: No, Lucky, not money. Though I’d better take a rain check on that offer, you never know when hard times might strike. Anyway right now what I want is to look more African. This American people have doubted my African heritage and I want to show them that I’m really from Kenya. I’d like to wear your African dress. I think I’ll really look cool and African in it. I’m one of a rare breed that can really look cool in anything. Sometimes I wear some of Michelle’s designer dresses and she can’t believe how cool I look in them.

Jonathan: Oh Barack, that is no problem at all. I can send down some…

Obama: No Lucky. No need to send anything down. We can just swap clothes right now.

At this moment, President Obama, without flinching, is reported to have undressed in front of the White House Correspondents, stripping to his Y-fronts. President Jonathan, while initially shy at undressing, soon took Obama’s cue and promptly undressed to his boxers.

The two presidents, according to reports, were grinning from ear to ear as they faced the media having changed into each other’s clothes. Obama made a great effort to look comfortable in Jonathan’s ethnic dress, while Jonathan was noticeably looking dapper in Obama’s suit and tie.

“You can call us Jobama,” said Obama to the media. “So guys,” continued Obama to reporters, “how you like me now? Am I African or what?”

A visibly delighted Obama is reported to have pointed at his hat saying, “And guys, where’s the grey hair? Ah ha” Playfully lifting and placing the bowler hat back on his head, Obama kept saying, “Now you see my grey hair, now you don’t.”

President Jonathan of Nigeria is reported to have left Washington happy and fulfilled, promising Obama that “from now on it’s suit and tie for me.”

Reports from Nigeria claim that President Jonathan has been spotted at a public ceremony with a black eye and sore claw marks all over his face.

According to sources, Jonathan is said to have attempted to wear suit and tie to his first function since arriving from America. His wife, Patience Jonathan, the aforementioned tiger, is said to have attacked him, telling him to “wear your traditional dress right now”, while smashing him one in the right eye for good measure.

According to reports, Jonathan put up some feeble attempt to hold his ground but Patience flew into a full blown Bengal tiger rage, with whiskers protruding from her face, and claws on her hands and feet.

She is reported to have leapt at Jonathan, slamming him against the floor and tightening the tie around his throat, mauled him right there. She’s said to have threatened to “choke you to death right now if you don’t take off that stupid suit and tie.”

Jonathan is reported to have nodded his head profusely in surrender before losing consciousness.

Since Obama’s now frequent disappearance, Michelle Obama is reported to have hired private detectives to find out the identity of the woman whom Obama is having an affair with, as she is quite sure he must be having an affair.